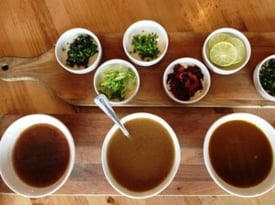 Bone broth as a healthy drink and a staple ingredient used by consumers in the home kitchen is rapidly carving space for itself in the health and wellness market and also in the restaurant sector and retail trade.

What kinds of health benefits does bone broth bring?

Bone broth as a foodstuff that promotes well-being is by no means a new discovery. Even thousands of years ago, chicken soup was considered a healing food. People ate it to improve their immunity and to fight inflammatory diseases and digestive ailments. Still today, it is customary in many households to prepare chicken soup for those suffering from a fever. In addition, this broth is said to contribute to a balanced mind and equanimity.

In their book Nourishing Broth, Sally Fallon Morell and Kaayla T. Daniel, PhD, assert that bone broth can help with a variety of ailments, stating that it:

Might it even be possible that eating and drinking bone broth daily over the generations is one of the important contributors to the longevity found in Asia and to a life full of health and well-being?

What makes bone broth a better option than stock cubes?

Truly nutritious broth is most often made from beef, pork, or chicken bones, through hours of simmering.

As a raw material, bone has the value of diamonds: when boiled, bones release, in particular, nutrients that enhance the intestinal lining, skin, hair, and healthy formation of our own bones, such as collagen, amino acids, and minerals (magnesium, calcium, potassium, iron, phosphorus, etc.).

There is not yet enough scientific research into the health benefits of bone broth, but at the very least authentic broth could have a positive effect in leading us as consumers toward healthful food and pure tastes more often. In the home, we want to cook our family nutritious and tasty food, for which bone broth can be used as a solid base, for example.

Read more about the healing benefits of bone broth: